Trouble With Algebra Problems? A Solution In Miami Classrooms 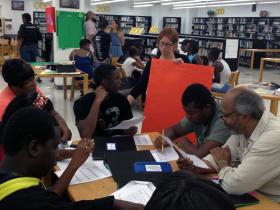 Math is a language. And like any language, teachers need to help students translate the language into terms they understand.

“This idea is to learn a language you have to talk it... you have to engage in it,” says Algebra Project founder Bob Moses.

But like the students learning algebra, it’s difficult to understand the process Moses described without watching students in action. So we sat in last week as the Algebra Project wrapped up orientation for its third group of students at Miami Northwestern High School.

“You can break down math into how you understand,” teacher Sara Weinberg told a group of students tentatively chatting about an assignment. “Break it into your language.”

Listen
Listening...
/
Educator and civil rights activist Bob Moses talks about the Algebra Project and education as a civil right.

Charts around the room provide guideposts. Relative pronouns become the mathematical statement, like “such that.” Relation words show what students are comparing, like how a student’s height compares to other members of his or her group.

Students walk over as a group to consult the charts and talk through the solution.

Here’s how the process works:

Students were assigned to small groups, and earlier in the week they measured the height of everyone in the group on a long strip of paper. They used that chart to write algebraic statements comparing height.

Students start with a plain statement: “Jesus’ height mark is higher than Chris’.” 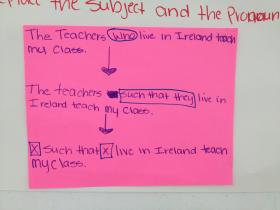 Working together, they convert it to a statement like this, where HM stands in for height marks: “The HM which are above Chris.”

Then, students swap nouns for the variables and relative pronouns for mathematical statements: “The set of X such that X is above C.”

“We just went from a sentence — ordinary people talk — to algebraic symbols,” Weinberg told the students after walking through the process.

This process lets students work forward or backward through a problem until they find language that’s familiar.

More than half — 52 percent — of Miami Northwestern students taking the state’s algebra end-of-course exam this spring scored a three or higher, considered a passing score. That’s up from 22 percent in spring 2012. The statewide passing rate increased to 66 percent from 58 percent over the same period.

The millage rates are heading down next fiscal year, but Duval County property owners can still expect to pay more in school taxes.

The people who walk through the doors of the Duval County School Board building often show up to deal with frustrating business.

Forget the ice cream truck. if Florida marijuana entrepreneurs and health regulators get their way a truck carting medicinal cannabis could be coming to a street near you.

Ryan Seashore starts off every CodeNow workshop with a simple request — write out step-by-step instructions for making a peanut butter and jelly sandwich.