Third Potential Named Storm Has Formed In The Open Atlantic

The National Hurricane Center is monitoring a system that has the potential to become the third named storm of the 2020 Atlantic hurricane season.

Forecasters say the broad area of low pressure is situated in the open Atlantic Ocean, several hundred miles east-southeast of Bermuda, and could form into a sub-tropical depression by Friday night.

It has a 50 percent chance of developing into a named storm by this weekend, forecasters say.

If it does, however, forecasters say the system will gradually move to the north and not impact land. It also could weaken due to unfavorable conditions in the atmosphere.

If it does strengthen, it would be called Tropical Storm Cristobal and would be the third named storm before Monday’s official start of hurricane season.

Tropical Storm Arthur formed two weeks ago and grazed North Carolina before moving out to sea. Tropical Storm Bertha formed on Wednesday off the coast of South Carolina and quickly moved inland.

With the formation of Arthur, 2020 is the sixth straight year that a named storm has developed before June 1. 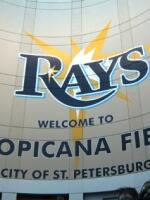