The debate over flying the Confederate Battle Flag on government property stems from the June 2015 shooting in Charleston, South Carolina; but the discussion has taken on a life of its own throughout the Florida Panhandle including in the city of Crestview.

At the center of the controversy in Crestview is a memorial to a local Civil War hero known as “Uncle Bill Lundy,” which was built on a parcel of city-owned property the year after William Lundy died nearly 60 years ago.

Over the weekend, family members held a ceremony to mark the relocation and rededication of the memorial.

Leading both ceremonies was the Great grandson of William Lundy, Greg Lundy Sr., “It’s semi-sweet. There’s really no reason this flag had to be moved. It was put up there by donations and all in 1958. The pole, the monument, none of it cost the city a dime. But, I’m happy that we’ve got it moved.”

Lundy made remarks at the site of the new Confederate Park located on family owned private property at the intersection of Highway 85N and Hemphill Rd.

However, the two-part ceremony began at the old Confederate Park located on City property at North Ferdon Blvd. and East First Avenue in Crestview. That’s where the controversy began back in July, “The mayor took the flag down, I say the mayor, the flag come down, overnight one night. It’s just the deal that they cut. We went back to the city council and showed our disgust on it. They agreed to let us put it back up until they could hold a community meeting. When we was told that we kind of thought that that meant if it showed support at the community meeting that we would be able to keep the flag flying.“

There was a lot of support for the Confederate battle flag and the Lundy monument. But, the flag is seen by many as a symbol of hatred and oppression of blacks, and there was also noted opposition from representatives of the civil rights organization - NAACP. Ultimately, the Crestview city council decided to remove it.

Greg Lundy Sr. says it feels pretty bad and he says that‘s not how he understands politics to work, “We’re not talking about discrimination against race or sex or something where you have to put your foot down. We’re talking about the flying of the flag. And our flag is a little different than a lot of them. Not that I agree with the other circumstances where they’ve taken them down in other places. But, this flag flew over a confederate memorial, not over the courthouse, not over city hall, over a confederate memorial. Where else would you fly a Confederate Flag. “

“I wish they would look at that flag with a sense of pride knowing that the people came before them fought for freedom and I wish they’d do the same.”

Also in attendance was Allen Armentrout, a member of the Steven R. Mallory Camp, Sons of Confederate Veterans based in Pensacola. Armentrout, along with several other members were dressed in traditional Confederate uniforms. Armentrout says he can relate to Lundy families’ plight because of his own families’ history, and it’s important to appreciate what our ancestor fought and sacrificed for…not so long ago, “We’re going to do everything we can to honor them and continue what they started. I want to see them forever protected. And that’s what my fore father did. My ancestor, my fourth great grandfather fought with Stonewall and the Stonewall Brigade with the 33rd of Virginia. I take great honor and pride that my blood line fought directly in the war and I’m going to fight now to protect what he did.”

William Allen Lundy fought with the 4th Alabama Infantry, Company D from 1864-1865 and in 1890 he moved his wife Mary Jane Lassiter and family to Laurel Hill. Lundy was the last surviving Confederate Soldier residing in Florida and died at the age of 109 in September 1957.

Again, Greg Lundy Sr. “I am the great grandson. It’s history. They can’t do nothing about my heritage. And I’m proud of my heritage. There’s nothing my folks done that would make me not be proud.”

The Lundy family says they want the new Confederate Park to be a place the community can be proud of and they have plans to add landscaping and a historical marker depicting the life of “Uncle Bill.” 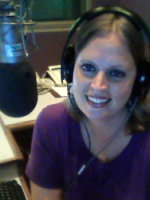 Danielle Freeman
Danielle Freeman has worked as a weekend host at WUWF since 2006 and a part time news reporter since 2013. Danielle is a graduate of the University of West Florida with a B.A. in Communication Arts with a specialization in Broadcast Journalism and a Minor in Public Administration.
See stories by Danielle Freeman
Latest Stories